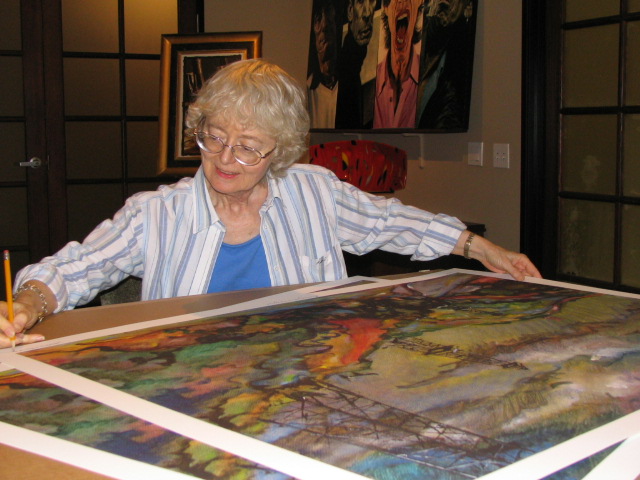 About the Artist & Black Gold® Prints

Limited Edition prints of oilfield paintings by JoAnn Cowans Artist/Historian are reproduced in the glowing color of Giclée. JoAnn is known internationally for her oilfield paintings. She is the only artist to have received Petroleum History Institutes prestigious “Keeper of the Flame Award’ for recording oil history.

Her Giclée are in many corporate, private and museum collections. She has worked with industry leaders in this advanced form of reproduction since 1995 and her prints are known for their quality.

NEW.  THINK BIG© Custom size of JoAnn’s Giclée prints are available on canvas up to 58” by 40′.

Black Gold: The Artwork of JoAnn Cowans® This special book is a perfect collaboration between artist and publisher. Tom Underhill designed and created a unique showcase for JoAnn Cowans’ paintings that show his understanding of her work. The book itself is a work of art.

Her second book, The Marina Nobody Knows, a personal odyssey of the 6o’s is now on indefinite hold.

The past three years has been focused on the subject that brought me to California-Hughes Aircraft and my husband, Ken Cowans’ work.

Now I have come back to my artwork and will present a much more personal and wider scope of my past career.

The first new additions will be portraits and figure paintings of the late 1960’s and early 1970’s. An example for this is the photo at right, a scene from Rick Jason’s movie “A Time for Love.” The story was about a couple that had met and loved in previous lives. I painted portraits for the movie and furnished paintings and drawings for scenes in the artist studio of the Jane Merrow character who was the love interest.

Benson Fong was cast as a friend of Rick’s. I also painted a portrait for Benson for scenes shot in his home. It was an exciting endeavour. I was given full screen credit right after the producer.

My paintings and drawings were also used in all the studio scenes. Getting to see how a movie is made from beginning to end and being involved in many parts of the process was a memorable experience. Rick was very charming and cooperative when I was working with him on the portraits and costume design for the Venetian painting. Years later we became friends.

More to the story and a new link, Reflections on Art will soon be added.

Click a category image to see the prints in the category. 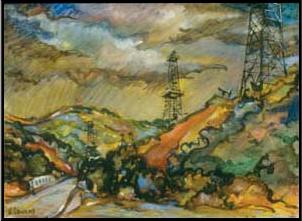 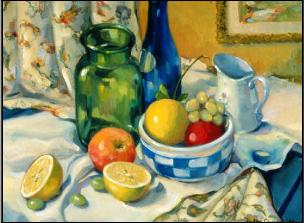 Paintings & Prints From the 60s 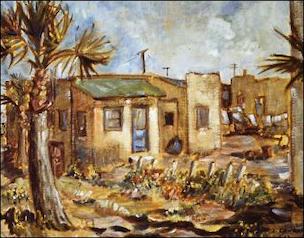 Movie – A Time For Love 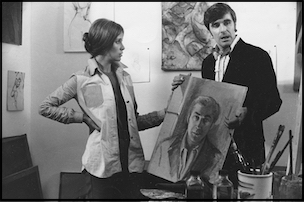 Studio scene with Jane Merrow showing her brother a ‘painting in progress” of Rick before she ever meets him.

(link to the movie) 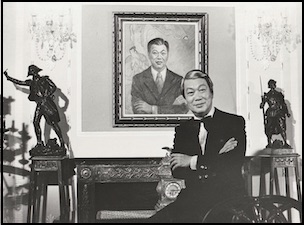 This scene was filmed in the home of the  Benson Fong character. It was shot with Benson standing in front of the portrait I painted.

She Dared to Paint Oil Fields

I will never forget when I visited JoAnn Cowans’ studio. We viewed her paintings – some landscapes, still lifes, and portraits. When she brought out her oil field plain air paintings my heart skipped a beat. I thought: She dared to paint oil fields. And the paintings are splendid.

A collector said to me “I don’t want a photograph of an oilfield. I want a painting of how the artist feels about the oilfield. It lifts the spirit.”

From the Artist
“Though many see the oil derricks and pumps as eyesores, Ms. Cowans insists they are beautiful. ‘In Brea some of the pumps are painted bright blues with bright rust colors on them and the head of the pump looks like the head of a grasshopper.’ she said. ‘They’re just terrific. Against the sky they make a beautiful compositional study.’“

Brea   Derricks After the Rain

The Brea Olinda Oil Museum is using the image of Derricks After the Rain for the Historic Museum and park trail signs. ” We believe this image perfectly conveys the unique beauty of the oil derricks and our region….It will be a wonderful addition to our upcoming project.”

“I wish you the best with the second printing of the book. All of my friends and colleagues here in London on the Dow Jones Newswires Energy Desk love your paintings!”

“By painting derricks in the 1960’s, JoAnn Cowans documented an important history when few if any of her generation thought to do so. With her canvas, paints, and easel (and later, her hard hat), JoAnn captured for posterity “oil Patch” scenes from the nation’s third-largest oil pro ducting state.”

“There is an elegance to the gray tracery of the derricks–and a dignified power. The rolling ground and living fields, rife with colors of the season, are concentrated energy… JoAnn is an accomplished painter. But it takes more than skill to create the sort of brilliance one finds in her works such as Evening, Brea Canyon or her masterpiece, City of Light.”