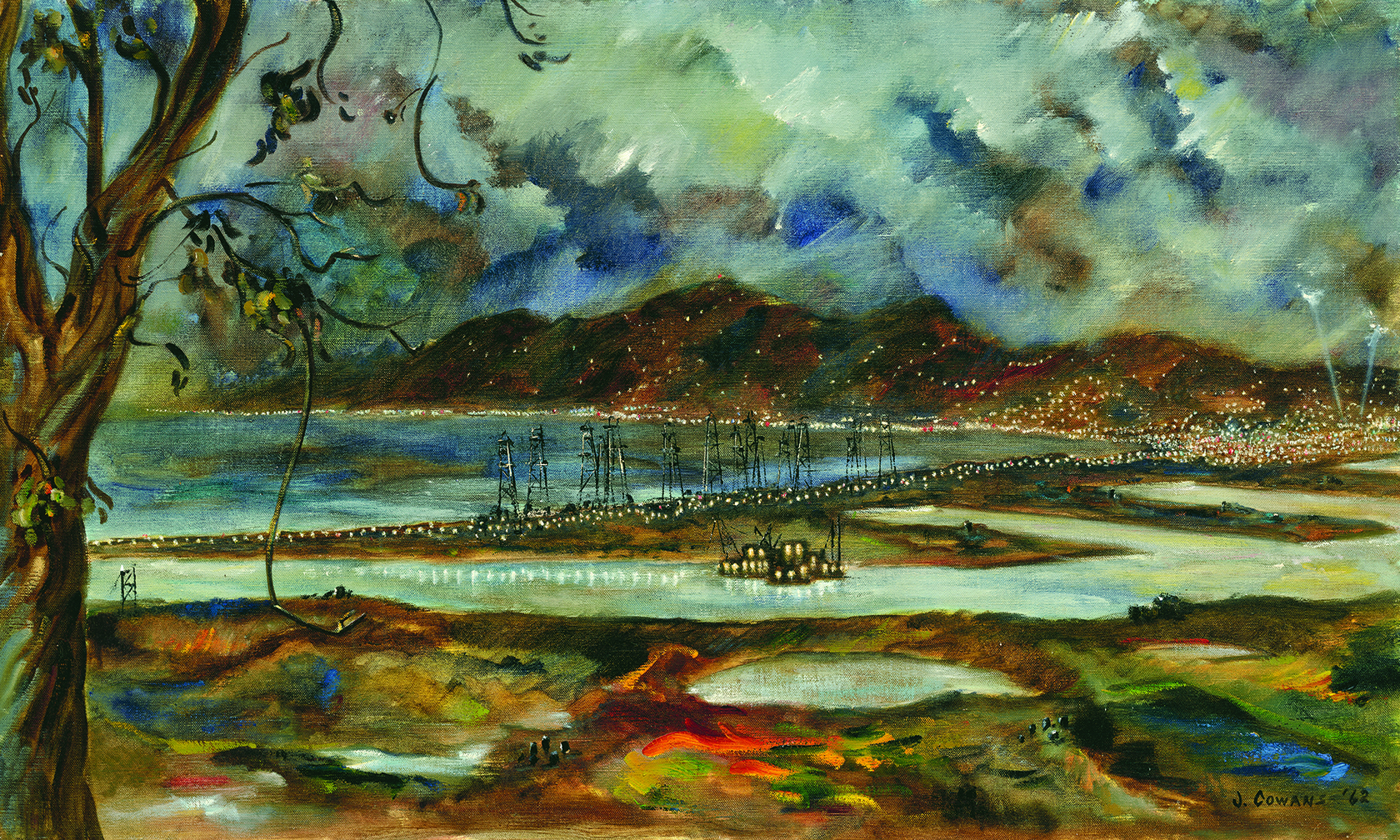 Seen from the same location on the hills of Playa del Rey, it shows the dredge working at night with light reflecting in the marina channel….

To read the newspaper article published at the time with the photo of JoAnn  painting on the hills overlooking Playa del Rey and the Marina click HERE.

The Fine Art of Giclée

JoAnn Cowans, Artist/Historian, currently has two exhibitions of her artwork on display with the theme of “The Fine Art of Giclée”

The Marina del Rey Historical Society featured in their museum JoAnn Cowans’ giclée reproductions for the online archives forum “L.A. as Subject” meeting of archivists. This continuing exhibit is now open to the public. The title of JoAnn’s exhibition is “Preservation of California History as Recorded by Artist.” Giclée printing is the greatest advancement in art reproduction since color printing was invented. For archivist this gives a beautifully accurate image of the work printed on archival paper or canvas with archival inks.

JoAnn is an Artist/Historian who spent two years in the early 60’s recording the Venice canals, bridges, Speedway and oilfields as the derricks were being taken down.  Through 1968 she had a studio in Playa del Rey where she taught art, held art events and exhibits, painted portraits and continued to paint the Playa del Rey area and record its stories.

Giclée reproductions of JoAnn’s paintings will include a life size 40×70” print on canvas of City of Night showing lights of LA over the canal and through the oil derricks, and Speedway and Oil Wells which is on the cover of her Black Gold coffee table book. Her newest release of Marina by Night is based on the popular The Marina, 1962 painting.  It is size of the original 24×40”, printed on paper. Canvas is also available.

The exhibit at the Brea Museum and Historical Society is of much wider scope. An informal display shows most of the giclée prints in their packing sleeves. Here the focus is on North Orange County oilfields in Brea and Fullerton.

When JoAnn moved to Fullerton in 1993 her studio overlooked the Standard Oil Fields bordering Bastanchury Road and on Old Yorba Road. Her backyard gate opened out onto these fields. The painting Bastanchury Oil Fields won Popular Choice Award in an exhibit at the City of Brea Gallery in 1996. Other paintings of these fields are now also on display.

JoAnn Cowans is the only artist to have won the Petroleum History Institute’s prestigious Keeper of the Flame Award for recording oil history. Oil plays a large part in the history and development of Southern California. Conquistadors wrote of oil found here on the beaches on their way up from Mexico. Large fields in Southern California made California the third largest oil producing state in the nation.

Her book, Black Gold, the artwork of JoAnn Cowans is on display in both Venice and Brea. This unique 12×12” book features oilfields but also shows paintings of more classical scenes, still life and flowers. Each is accompanied with the story surrounding the art. Forty-three of her originals are shown in color with enlarged color details on facing page with their stories throughout the book.

Fate smiled on JoAnn when she came to Orange County.  It was a “magical time for Giclée.” In 1992 David Coons had invented the world’s first flat-bed scanner large enough to scan paintings directly. Scanning from the original art gives a much more dynamic range than could have been done by scanning an image from a photograph. The superior quality of color and detail allows the viewer to better experience the total impact of the painting.

By 1995 JoAnn was taking her paintings to David’s home in Manhattan Beach to be scanned in his garage. David still archives her art scans. Maryann Doe wrote computer software for the Iris Printer in her garage. It took an hour to print a 30×40” giclée. Her company Harvest Productions became the largest printer of fine art giclée’s. Giclée is the French word for “spray of ink.”  JoAnn worked with these pioneers of the industry including Scott Williamson.  Scott ran the presses at Harvest when JoAnn was there and is now her publisher.

Technology has progressed. It now takes about six minutes on the printer for one 30×40”print. Giclée can be enlarged without loss of detail. JoAnn specializes in large prints. The enlargement can provide more detail and drama to the Giclée. Her paintings can be enlarged to 58” on the short side. This becomes an art form of its own.

This series is released especially for display in museums, corporate executive offices, boardrooms hallways, lobbies, boutiques restaurants and homes where owners “want to make a statement.” 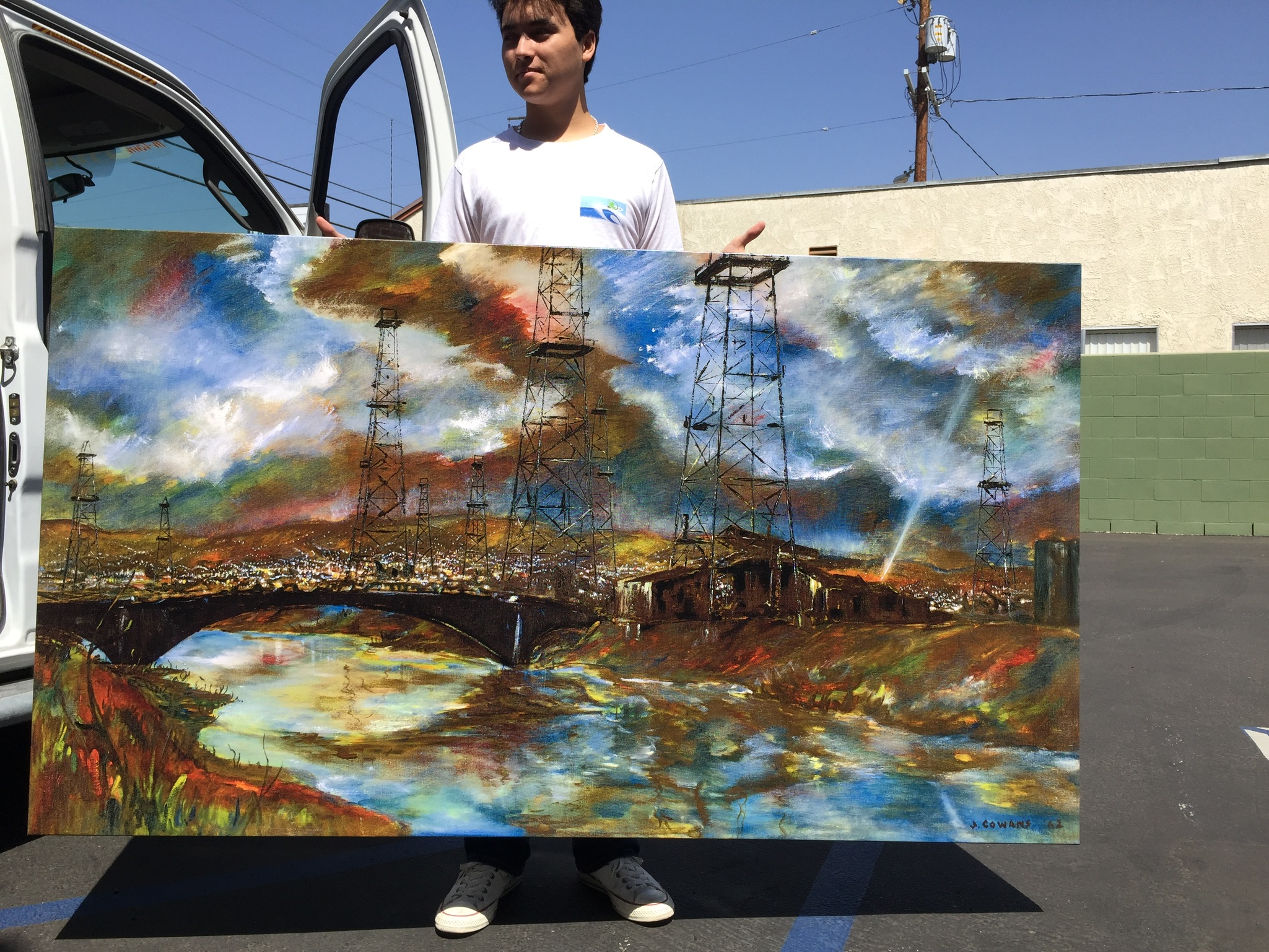 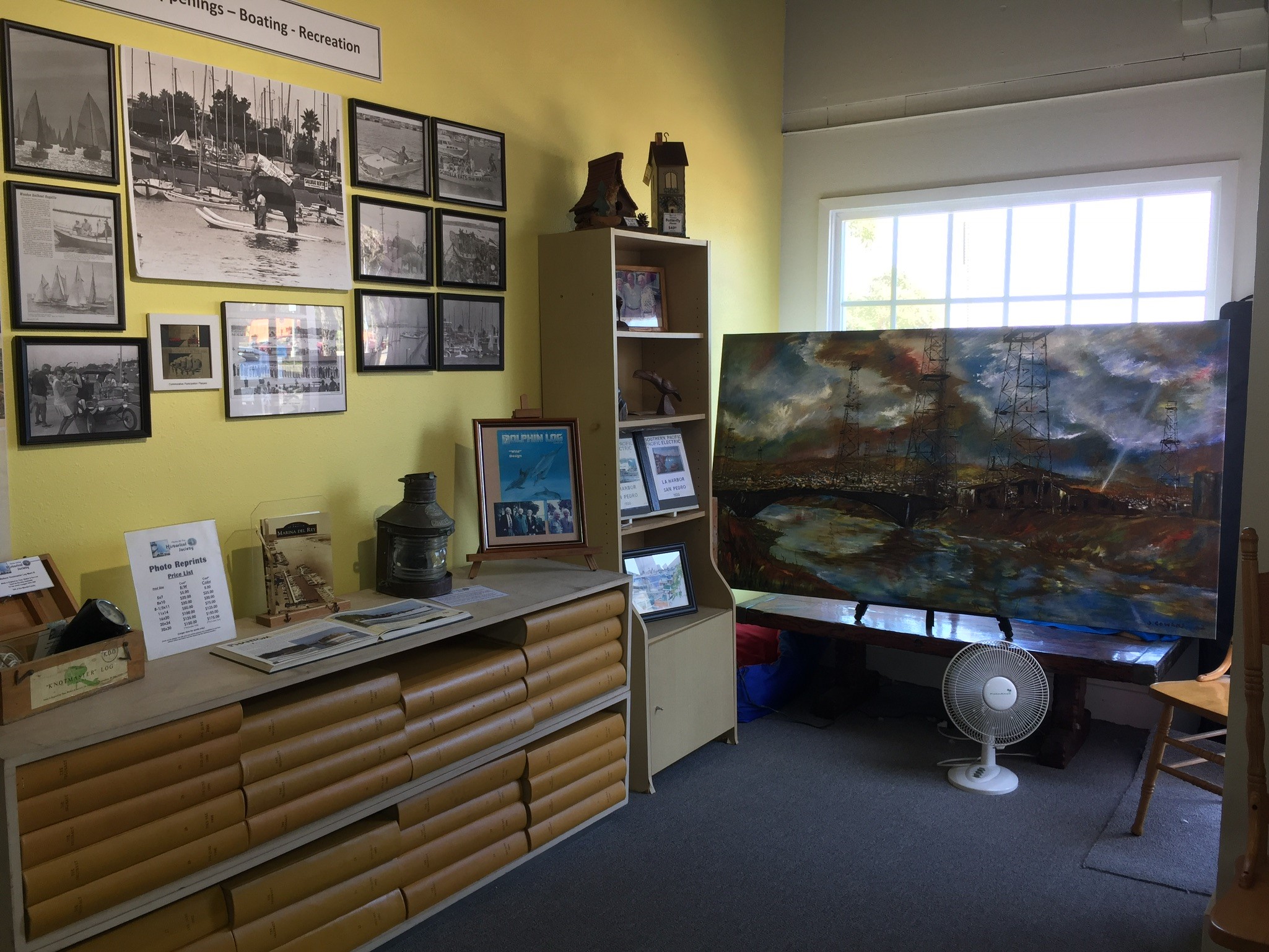 *These originals were all painted on linen giving them a unique patina to the murals.