*For insightful stories about Hughes Aircraft Company, some that were classified, some instructive and some humorous, read D. Kenneth Richardson’s book “Hughes After Howard”.

The scientist did not depend on computer programs, computers or calculators. An engineer’s Badge of Honor was a slide rule with a pocket protector and a rigorous understanding of mathematics and the scientific method.

A Hughes Fellowship brought us to California in 1957. Hughes Aircraft was at the pinnacle of the cutting edge of science and technology. To maintain that position and insure the brightest and best engineers, Hughes offered fellowships. My husband, Ken Cowans, had graduated from North Carolina State University at the head of his class in mechanical engineering. He learned two weeks before graduation and our wedding the next day that we were coming to California.

As I came from a small liberal arts college in North Carolina, I expected a “Southern hospitality” welcoming dinner. Even more naive, I thought Howard would be there to do the honors. It was not to be. Ken hit the ground running and never looked back.

History changed on October 4, 1957, when the Soviet Union successfully launched Sputnik I. It was  The Dawn of the Space Age. (NASA) This was just three months after Ken came to Hughes. Work was urgent, intent and exciting. Deadlines often required late nights, with engineers sometimes working around the clock. 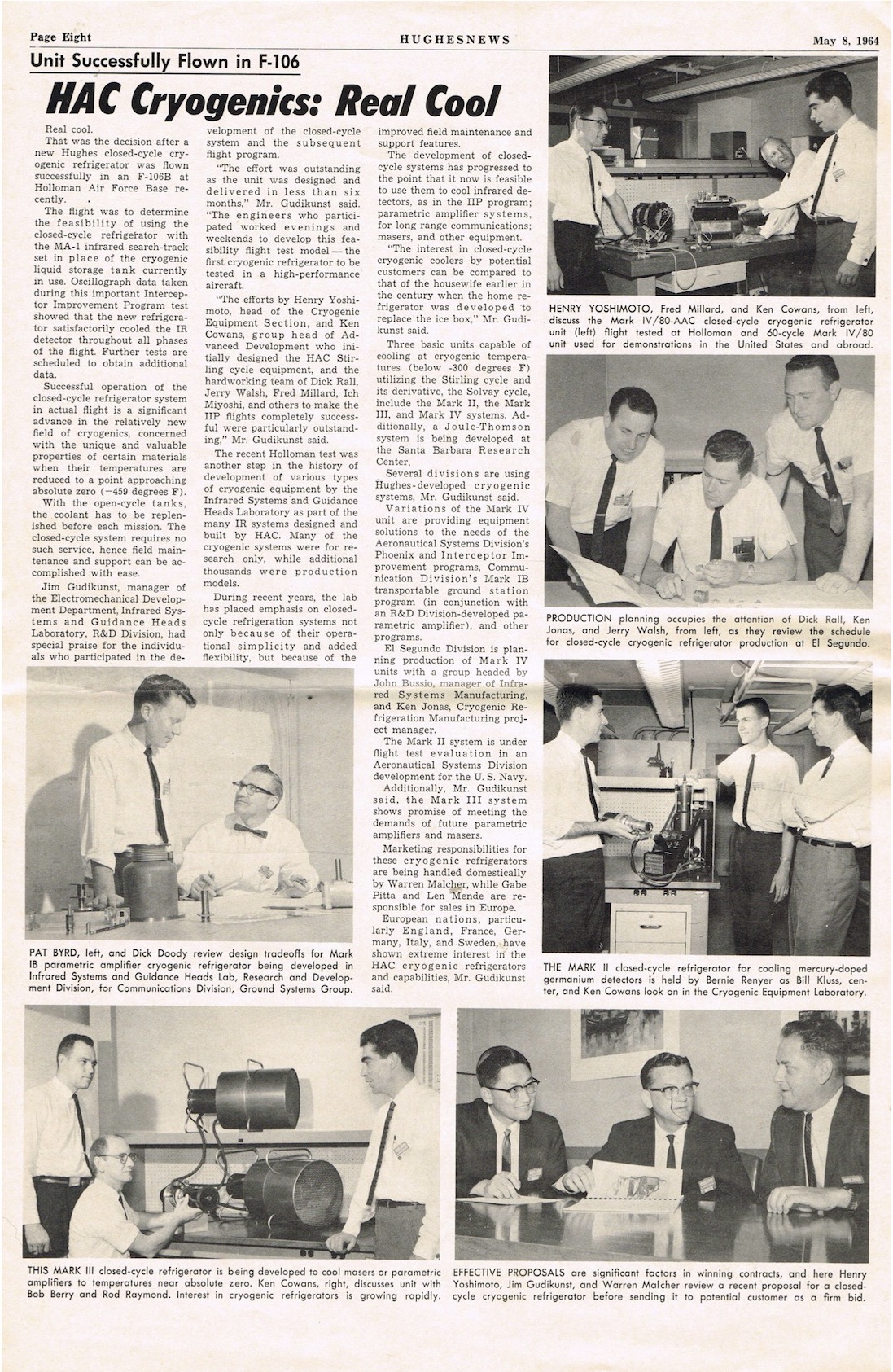 “That was the decision after a new Hughes closed-cycle cryogenic refrigerator was flown successfully in an F-106B at Holloman Air Force Base recently.”

“Successful operation of the closed-cycle refrigerator system in actual flight is a significant advance in the relatively new field of cryogenics, concerned with the unique and valuable properties of certain materials when their temperatures are reduced to a point approaching absolute zero (-459 degrees F)”

The effort was outstanding as the unit was designed and delivered in less than six months,” Mr. Gudikunst said. “The engineers who participated worked evenings and weekends to develop this feasibility flight test model – the first cryogenic refrigerator to be tested in a high performance aircraft.”

“The interest in closed-cycle cryogenic coolers by potential customers can be compared to that of the housewife earlier in the century when the home refrigerator ws developed to replace the ice box,” Mr. Gudikunst said.

Ken’s first project at Hughes was analyzing a sapphire dome that goes in front of an infrared detector on a guided air to air missile. This was to see if the dome would break due to the rapid heat influx on firing due to the high Mach numbers encountered.

Ken was the only mechanical engineer in the group. The rest were electrical engineers. He was the only one that could do it. The analysis required use of Laplace transforms used to solve transient heat transfer problems

As these projects were classified I only found out about them recently. While talking about my current book, Ken told me this and other stories: Research on the 3-5 micron detectors aboard a missile involved sitting in front of a Moviola while watching and analyzing films from cameras aboard attack aircraft flying  toward clouds and other aircraft.

There were a lot of jokes from other engineers at the time as Moviolas were then used for editing movies.

From this project Ken went on in heat transfer* and started, then managed the cryogenics lab .He wrote the book The Stirling Engine and Heat Transfer, 1961, that was used at Hughes as bible on the subject. After writing each chapter he taught a class on it to other engineers in the group. The real irony was that he didn’t study heat transfer in college because he thought it was boring. It has been central to his field ever since. Ken has over 100 patents granted.

* Thermodynamics is the study of interactions of heat energy. It includes the study of entropy production. Heat transfer is a specialized field; the detailed study of transfer of heat. To be successful, an engine or system must be analyzed using both. 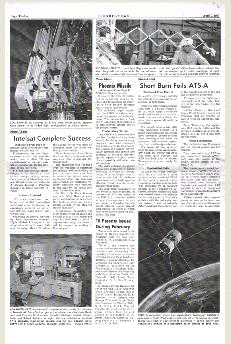 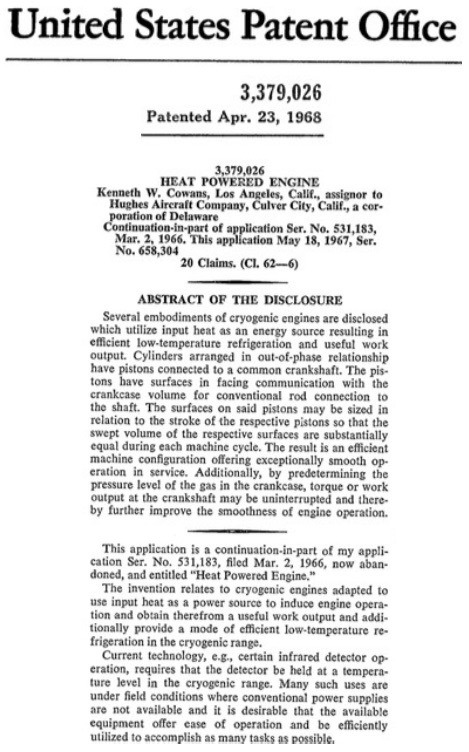 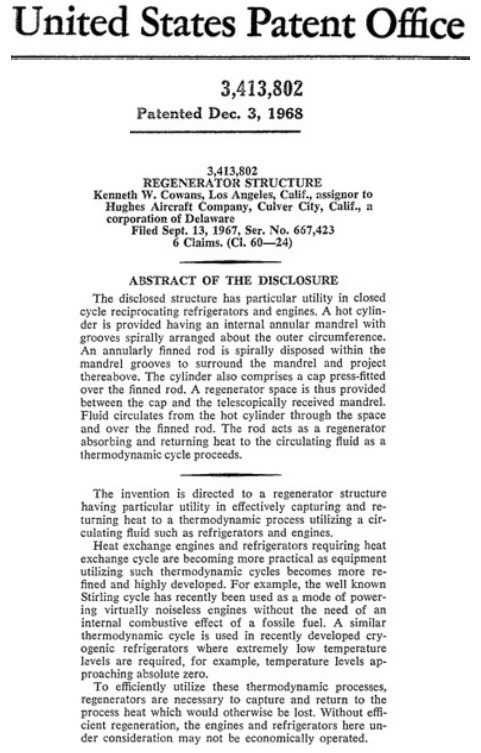 “The disclosed structure has particular utility in closed cycle reciprocating refrigerators and engines.”

The patents shown here were awarded to Kenneth W. Cowans for early work done at Hughes Aircraft Company (HAC) in Culver City, CA. The inventions are in the fields of engines, heat-exchange regenerators and cryogenic (colder than -240°F) refrigerators. Combinations of all these became needed with time. As example: An engine/refrigerator cooling to -440°F, powered by heat from a decaying radio-isotope spent 18 months in earth orbit.

These inventions found extensive application at HAC in applications for all military environments. They were also used in cooling of early computers. A department was founded based on these cryogenic machines.

Hughes Aircraft and the Fellowship program attracted top engineers to Los Angeles the way the movie industry attracted beautiful women to Hollywood. It had a great impact on the region. Southern California became the hub of the aerospace industry similar to Silicon Valley’s leadership role in integrated circuit technology.

The program was quite generous. When we came to California starting salary for working full time was $6,500/year (about $55,000 today). Hughes also paid moving expenses to Los Angeles, tuition for graduate study at UCLA or SC and a stipend for educational expenses. Ken chose UCLA. However a year of theoretical physics proved very boring compared to the hands-on excitement of the work he was doing at Hughes. There was an urgency felt by the whole country because of the launch of Sputnic. This intensified the need for his inventions.

Many went on to form their own technical company. These companies include: the Rand Corporation,TRW, McDonald Douglas, and North American.

Ken left Hughes to create a company, Kinergetics Inc. (KI) that made life support systems for deep divers in offshore oil. It eventually commanded 95% of this field worldwide. Systems were used extensively in Alaska, the North Sea, the Persian Gulf and elsewhere. KI eventually expanded into color TV for underwater as well as high-end audio for the home. They were amongst the first firms to do business with the People’s Republic of China.

KI also did an advanced project with astronaut-aquanaut Scott Carpenter.

More recently, in 1995, Ken founded Advanced Thermal Sciences of Anaheim. This was done at the request of Amin Khoury while Ken was working at BE Aerospace. The company is based on Ken’s inventions for the heating and cooling (from -80°F to 250° F) integrated solid state circuits.

As Hughes did not prosecute patent infringements, it was easy for the technology Ken and others invented there to spread throughout Los Angeles and the rest of the country. 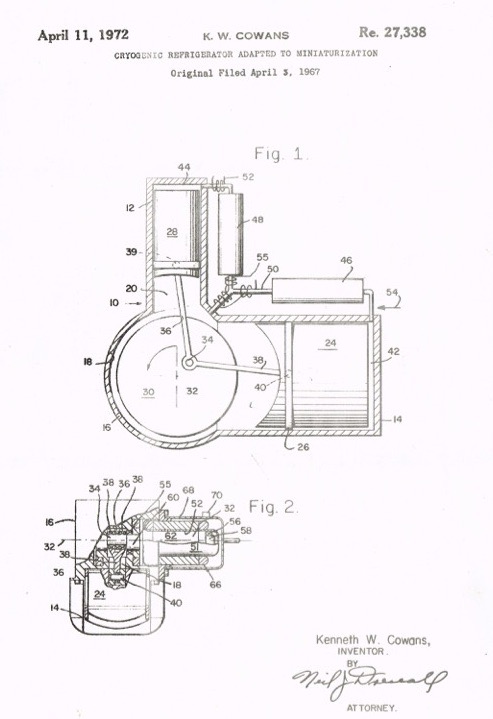 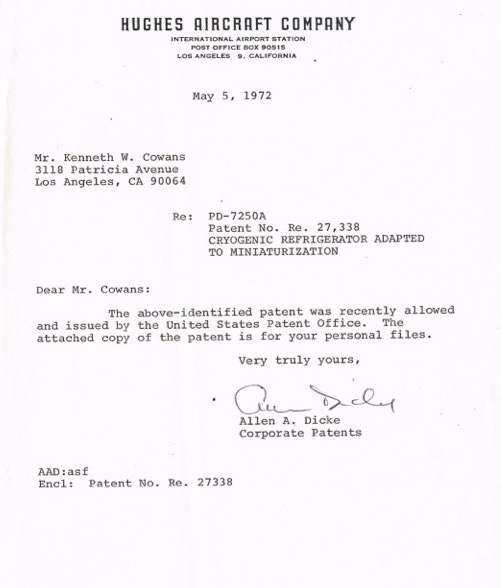 When a patent was awarded, Hughes gave the inventor $100. By the time Ken left Hughes in 1968 that had increased to $150. Ken had 16 patents by then, and was tied with a PHD in Research for the most patents at Hughes. 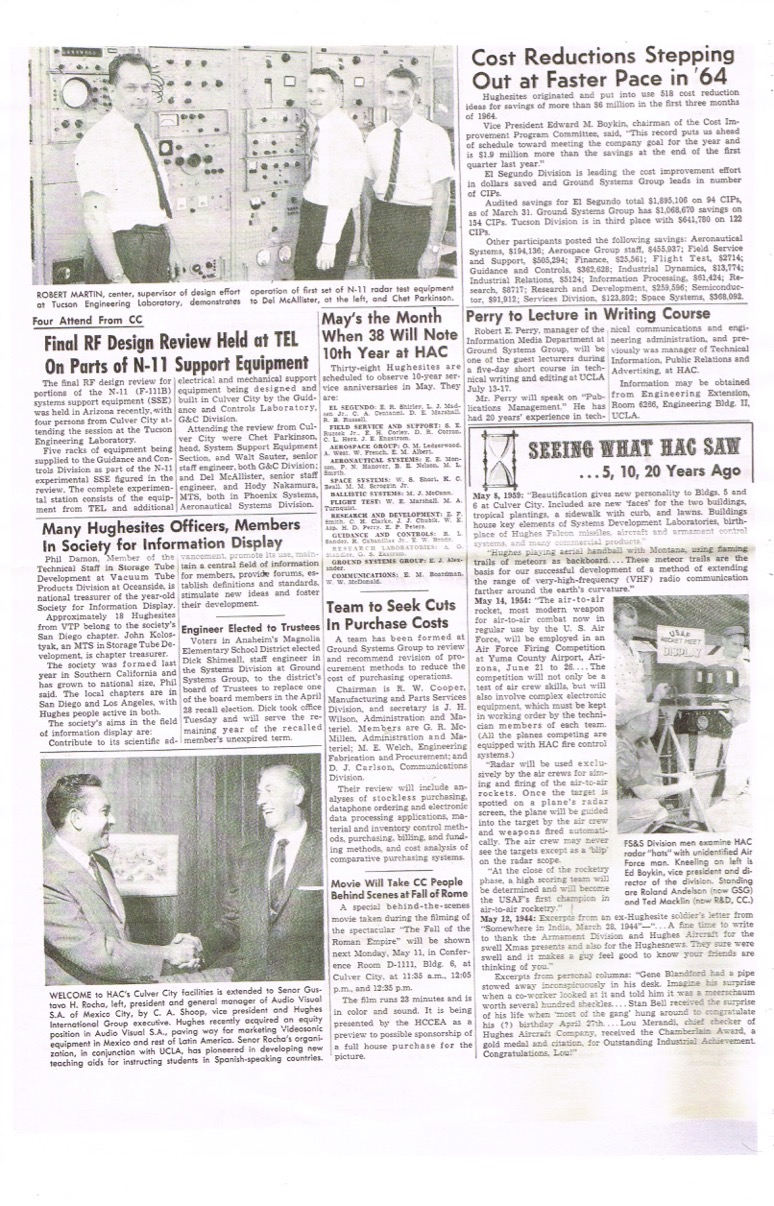 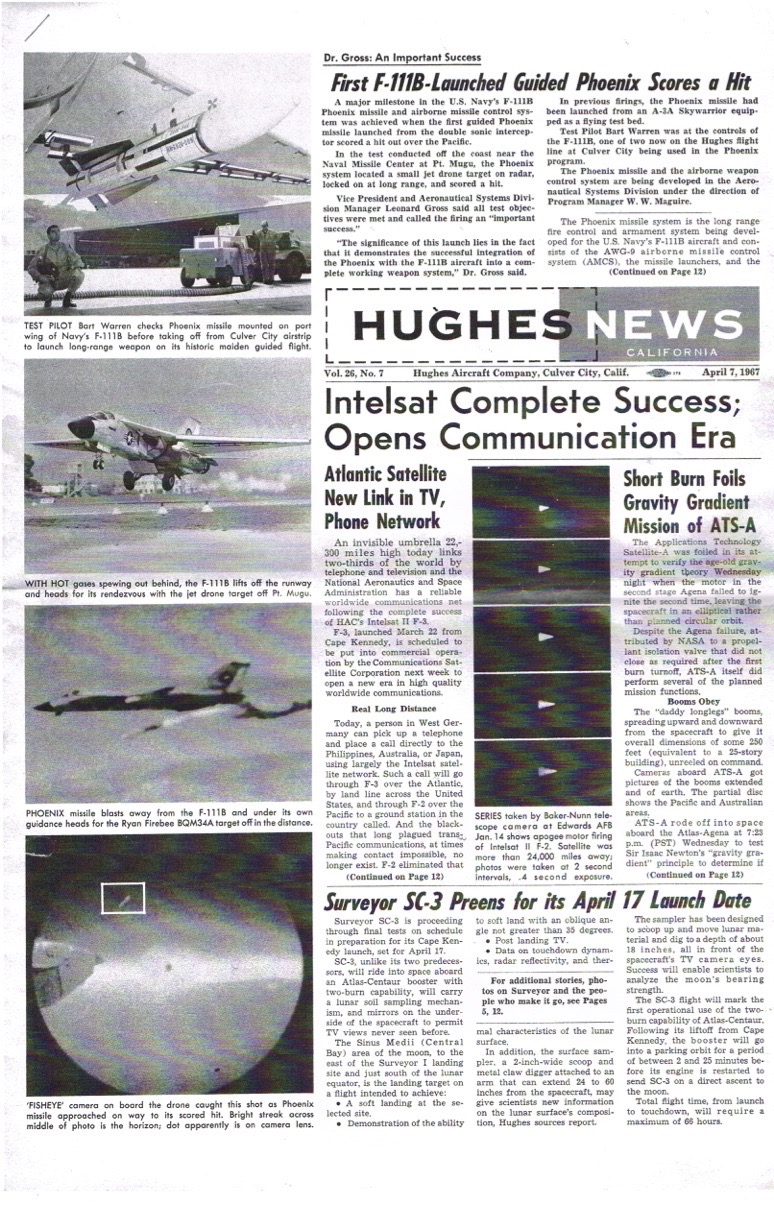 Our friend Larry Iboshi had for some time talked about working with an organization Society for Information Display. As Larry had worked for Hughes in Fullerton, a few weeks ago I pulled out the above Hughes News to show him. There, in the same issue as the feature about Ken, was an article about the formation of this group. Larry sent the following information:

Today SID has become a global organization and the Los Angeles Chapter is still active with a one day conference on February 6, 2015 with a topic “Advances in Flat Panel Displays”. The conference was held at the Costa Mesa Country Club.

A Man of Many Talents

The Gate Crasher and the Tooth Fairy

The Tow Project and the Rattlesnake